Bardstown was settled in 1780, and selected as the county seat of Nelson County, then part of Virginia. It is Kentucky’s second oldest city.

Bardstown got its name from Bard brothers David and William, the former having a 1,000-acre land grant from Patrick Henry, then governor of Virginia, and the latter acting as surveyor.

The discovery of Bourbon in 1789 is attributed to Baptist minister Elijah Craig.

At any given time, Kentucky has more barrels of bourbon aging than people – some 5 million to its 4.2 million population.

More than 300 buildings in Nelson County are on the National Register of Historic Places; nearly 200 of them are in the historic downtown district.

Bardstown has been given the distinction of being named “The Bourbon Capital of the World” as over 90% of the world’s bourbon is produced in Bardstown and the surrounding region.

Be sure to visit our local distilleries including Barton 1792, Heaven Hill, Jim Beam , Willett Distillery and Makers Mark just a short drive away. Each features tours and visitor’s center with unique bourbon inspired gifts or specialty bourbons only available on site. There are other great Kentucky distilleries in our region that are a must see while in Bardstown. Hundreds of thousands of visitors experience the world famous Kentucky Bourbon Trail each year, which Bardstown boasts as its epicenter. 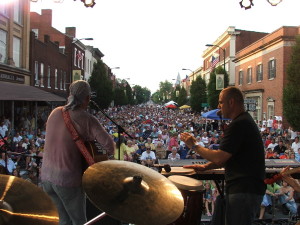 You will find something to do just about every weekend in Bardstown and its surrounding communities as they host 35 events each year celebrating everything from our bourbon heritage to the colors of Fall at nearby Bernheim Forest.

Enjoy shopping in a downtown where historic buildings have been transformed into unique shops, boutiques, restaurants and taverns and where visitors refer to downtown Bardstown as a destination attraction.

The Huston House was born with the idea that visitors have a beautiful, inviting and comfortable place to stay while in Bardstown in hopes you will make plans to return year after year.